Sales of Cheap Homes Plummets To An All-Time Low

Cheap homes becoming scarce is nothing new in the Australian real estate market, and now homes for sale below $400,000 has hit a record-breaking low.

The housing market has experienced a small decline in recent months but the effect of this decline is not felt much in the lower end of the real estate market. What’s more surprising is the amount of sales for houses below $400,000 because these houses, although highly affordable, haven’t sold much.

Data straight from CoreLogic, revealed in a detailed report of their analysis that the value of national dwellings have declined by -0.8 percent during 2017-18 from a rise of 10.2 percent in the previous year. This decline in property values is simultaneous with the decline in the sale of homes below $400,000 during the same period.

The decline in these sales has been greatest in regional areas whilst sales under $400,000 in Australian capital cities reached an historic low of 25.8 percent for units and 13.9 for houses.

Bucking the trend is Perth, which is witnessing a rising trend for sale of its houses and units below $400,000. The city witnessed a sale of 26.7% of all houses under $400,000, a figure that’s considered the greatest share under this mark since June 2013. Other capitals including Hobart, Darwin, and Canberra are also witnessing a decline in the sale of  cheap homes below $400,000. 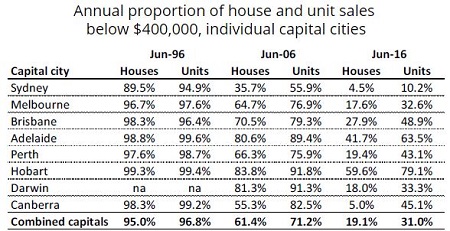 There’s no doubt the value growth in residential property has eased in recent months and even declined in some markets.  For investors it’s important to realise that there are many variables in real estate that leads to markets within markets (or sub-markets).  The decline in recent housing values has been mostly in the higher priced end of the market, properties sold between $400,000 and $700,000 are still performing well and showing opportunities still exist to buy quality investments.

The importance of binding nominations in estate planning